The dog beach party in Chania, first time in Greece

The dog beach party in Chania, first time in Greece

The turnout of people was exceptionally big and contributed to the success of the celebration.

The party was an animal celebration, with which we wanted to emphasize symbolically that the animals do not pollute the beaches, since the Ministry of Navigation delays unduly to answer to the documented request of the Panhellenic Animal Welfare and Environment Federation for the withdrawal of the ban-prohibition of the animals’ entrance to the sea – when all the law preconditions are obeyed.

Our fellow citizens together with their leashed dogs and their medical books, gathered very early at the central beach in Agioi Apostoloi.

In the area there were multi colored balloons and a bazaar for the financial aid of our Association. Member of our Association and a positive trainer for animals answered to questions of the dog owners and a lot of informative printed matter was distributed around. 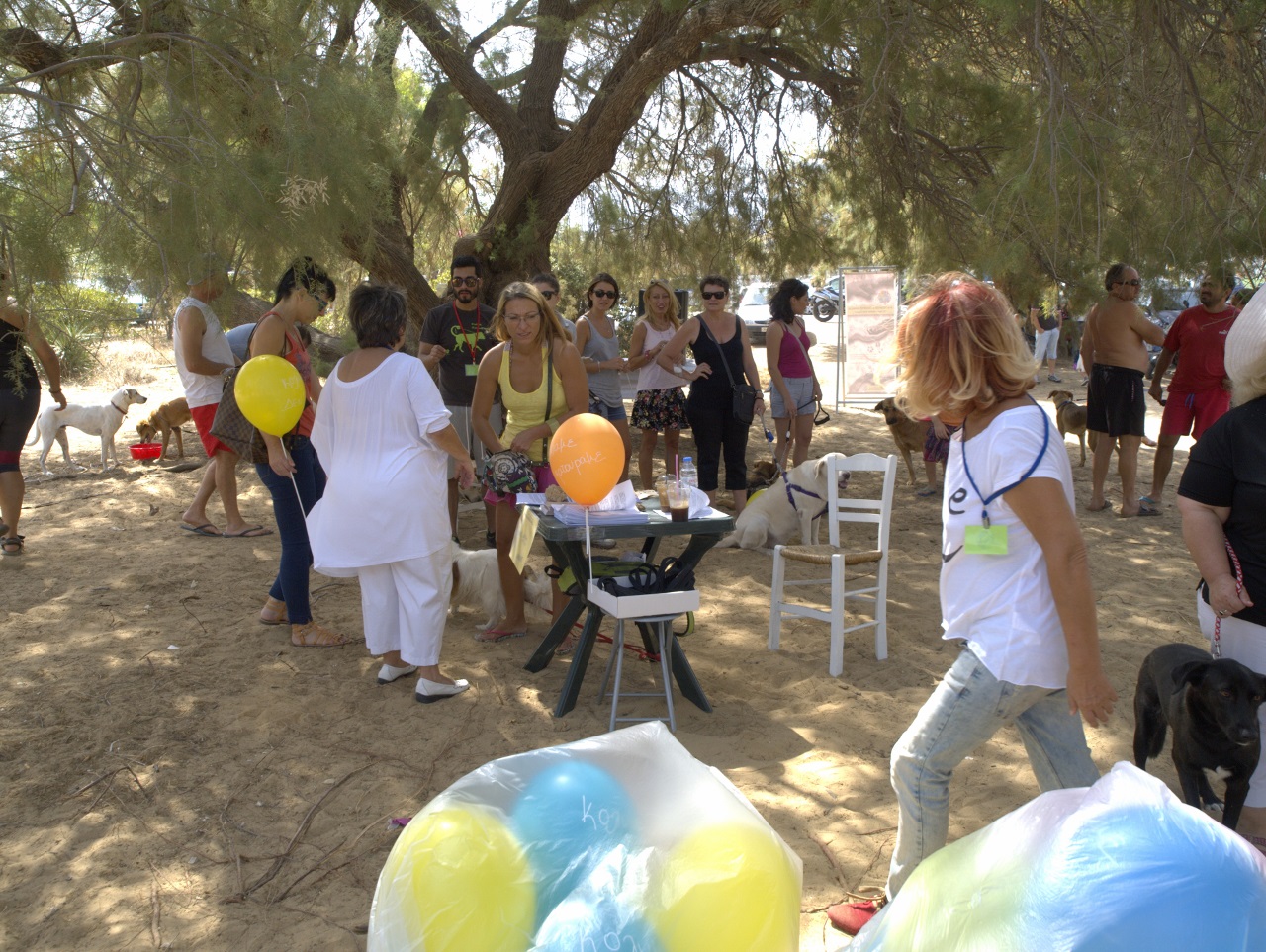 Under the motto “we swim, we do not piddle”, our quadruped friends competed in groups and fought for their prize.

We awarded the greatest, the most fearful and the most fearless swimmer. The animals swimming together with their owners created an enthusiastic atmosphere and the whole mood was very happy. 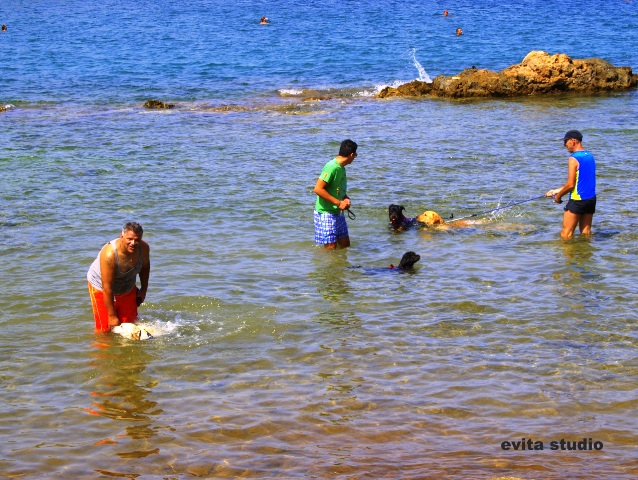 Champions of course were the Labradors crediting their fame as water fans! 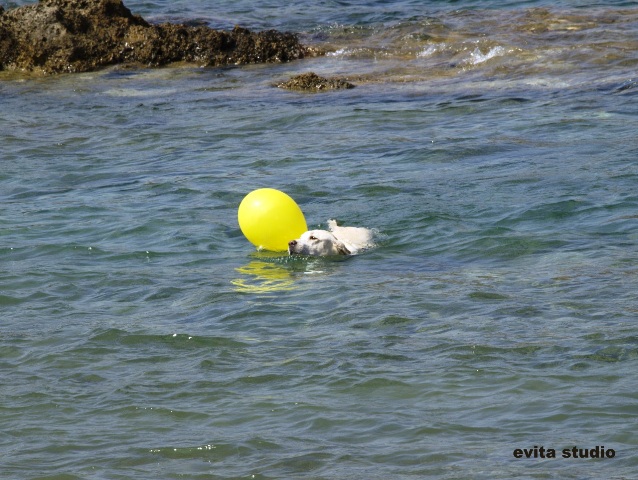 No episode occurred and the tourists on the beach were enthusiastic by the Association’s initiative. No person was complaining. The only protesting person was the lifeguard of the central beach, being afraid that the animals would swim there and ruin the peace of the place.
The police and the port police presence were very discrete and from their face expression we realized that they were enjoying the whole event.
All our four legged (some were three legged…!) friends took their balloon and were awarded treats which were brought by our friend Irini to celebrate Boubou’s birthday (Boubou being the puppy that many years ago was found in the streets…) 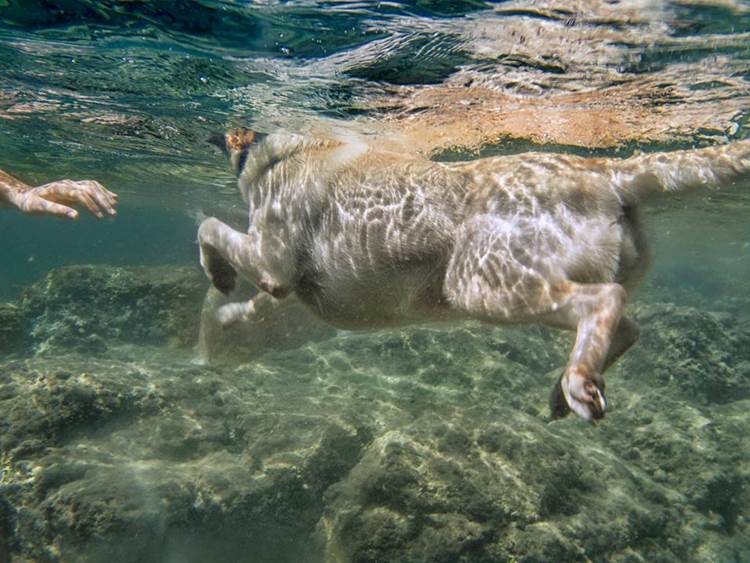 No fights were noticed and regardless the difference in the number, size and color of the dogs no problem was created.
Members of our Association passed out necessary bags and tissues to clean up after their loving doggies and before the end of the party the place was cleaned thoroughly and remained cleaner than before. There were also specific garbage boxes for the dogs’ …poop!

In our effort to promote the electronic identification the award for the winners was the free chipping. After the contest, everybody continued to have fun, listening to the music, swimming and drinking their beers together with friends.
We had to increase the number of awards because the participation was bigger than what we had thought and also because most of the contested four legged friend were marvelous swimmers, proving in this way their love to the sea and water – a relation that we are trying to deny to them , because we are still full of prejudices. They we truly happy!

One Labrador ignored completely the contest and when he entered the sea he …. disappeared! We were worried, but his owner reassured us telling us that each time his dog enters the sea he swims at least for one hour! And really, after one hour he appeared very happy and joyful! Was it possible not to award him, even though he didn’t follow the rules????? The most impressive thing was that he was still full of energy and he continued to play all the time with a ball. We do not know how many hours he must have slept afterwards…. 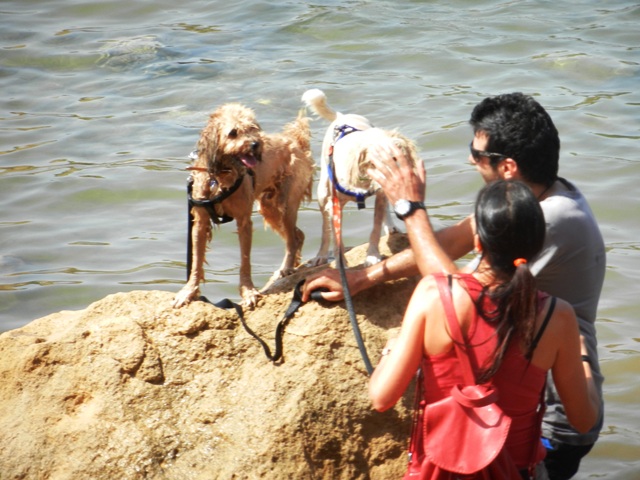 Yesterday we said goodbye to four stray dogs that a member of our Association has adopted and next week they will travel to Pireus and will become citizens of Athens! 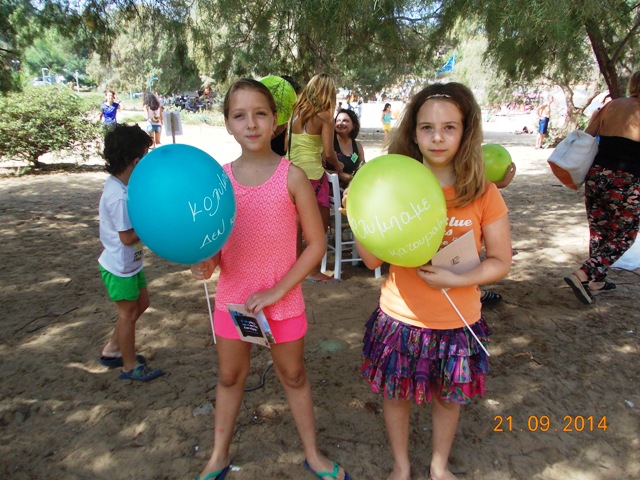 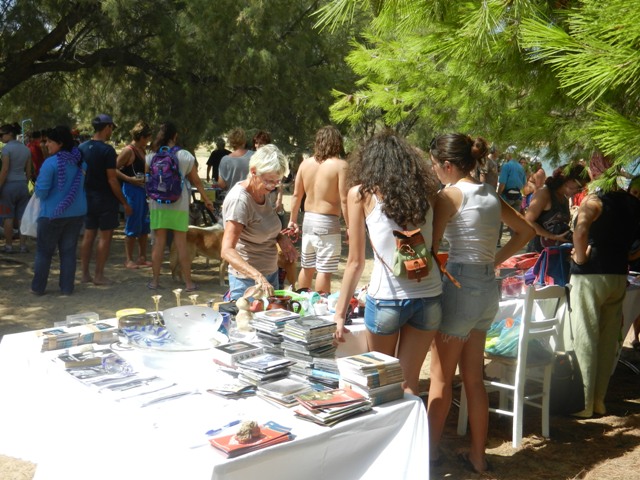 We would like to thank Mr. Eftihis Maniudakis (Evita Studio) for covering the event with photographs and the DJ Stelios (www.djstelios.gr) for supporting us with the audio equipment. 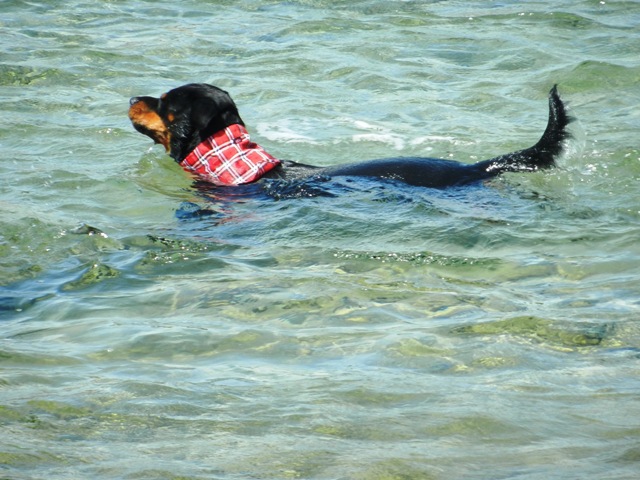 Whoever wants to obtain photos of the event or his dog during its action, can come in contact with Mr. Manioudakis and buy the photos at a price of 60 cents each.