An unbelievable practice, unfortunately common in Crete, causes a “rain” of complaints by the visitors of the island every year. Barrel-dogs, the poor animals whose home is a rotten barrel, remain tied to it with a short chain, under the hot sun in the summer and in winter when it rains, as if they were tools or materials.

These complaints were again from tourists from the Czech Republic, England and Germany. The chairwoman of the organization and secretary of the Federation, Maria Houstoulaki, stressed that two of the people who complained were men, which means that men show an increasing interest in animal welfare. She also stressed that foreign people in general have a different attitude to animal welfare

“On a daily basis tourists complain, especially now in the summer, about the squalid conditions in which animals live. At least 21 complaints have reached us in July only from tourists, most of whom were Dutch, English and German, regarding many areas of Heraklion prefecture, like the municipality of Malevizi, Agia Pelagia and Vulismeno Aloni, but also other areas of the municipality of Heraklion like Voutes, Kounavi and even Mesambelies. For one more time, it seems that tourists are very concerned with the problems of barrel-dogs and deserted animals..

We have also received complaints per email about barrel-dogs by tourists, and currently we work on three of them, from Italy, the Netherlands and England, stressed Maria Houstoulaki in an interview with Nea Kriti.

Crete is one of the Greek islands that are visited by large numbers of tourists but unfortunately it has a gruesome secret – as dogs are forced to live tied with a short chain, that does not allow them to move, protected from the weather only by an old rotten barrel. Sometimes these dogs remain tied in winter and in the summer, even without barrels or any other shelter. .

The so-called “barrel-dogs” are used as “scarecrows” or “bells” by farmers or cottage owners. Often the dog only has a dirty bowl with water and very little food, at a country home visited by its owners only at weekends. The dogs live a miserable, painful life, as their owner takes no interest in their welfare and uses them only as “guards” of the home, without offering them anything. Of course, barrel-dogs are illegal in Greece and if a complaint is made at the local authorities, they have to take action and arrest the owner for animal abuse.

At the beginning of the tourist season and during it, the General Police Directorate of Crete has ordered policemen to perform controls for the application of the Law 4039/12, which provides for minimum imprisonment of one year and punishments from 5.000 to 30.000 euro, depending on the degree of abuse. 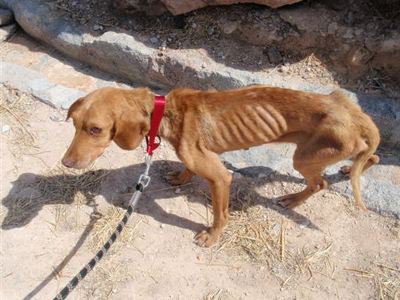 Dogs, according to the law, stresses Ms Houstoulaki, have to be tied only for few hours and, most importantly, they have to be inside or near their owner’s home and be directly supervised and taken care of by their owner. If the dog is in a sheep-fold, it has to be free in an area with fence and never in the street, in paths or steep places

It is worth mentioning that the Police, focusing on the problem, are also informed by relevant seminars. The last one took place yesterday in Chania and 70 directors and other officers of the Police participated in it. In August, seminars will also be held in the other prefectures of Crete, the goal always being to fight criminality against animals.

Meanwhile, Ms Houstoulaki has been talking in the past two months with the European Commissioner for animals Mr. Gavinely, so that he intervenes to solve the problem of barrel-dogs in our country, because Greece has not applied the EU legislation for the protection and welfare of both pets and productive animals.